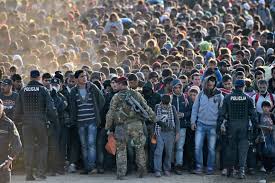 I personally believe there is a tremendous amount to be gained by such a discussion as the distinctions of strengths, weaknesses, differences between the different nations and races of the earth.  Getting to know them is like getting to know one another.  It is not to become separate but to grow together.  It is not to build barriers but to remove them.  It is like courtship, not divorce.
Love comes not just from knowing the good things about one another, but in being aware of the ugly too and loving anyway.  That is a solid love, with nothing to hide.  It enables the blessed nakedness that marriage symbolizes.
I say that such a discussion could be wonderful.

I would begin by pointing out what is probably the biggest difference, the primary dividing line of individuality, and that would be the broad generality of East versus West.  East represents mystical, intuitive, whereas West represents analytical, cognitive.  Right brain and left brain, male and female.
Yet in drawing that distinction, I think immediately of the Native Americans who fit much more into the “East” description with their intuitive connection with things spiritual and their profound reverence for all living creatures.  Could we say that this “East vs. West” distinction could also be demarcated by “Colored vs. White”?

It seems to me that despite national boundaries, people of color seem to be more right-brained than those of a Caucasian complexion.  So perhaps the primary distinction is not between East and West, but is superseded by the more encompassing colored and white distinction.
In making such a distinction, I must say that my love for people of color increases even more because of my reverence and sense of value for the intuitive nature, which I find difficult to foster in myself.  It’s like the husband who venerates his wife for her unique qualities which synergize with his in a yin/yang manner.

Another broad brush stroke, but substantially more specific than the first one just discussed, is the Mideastern nations and races.  I’m thinking of the Arab people and those in India, as well as the Jewish people who stem from and headquarter in that region.  It seems to me that they have an extreme male dominance complex, which suppresses women and shuns their equality — not in a sense of sameness, but of value.  Religiously, they are way back in the law of Moses, with a rigid legality that does not have much room for grace.  Their strength, be it noted, is in their piety toward God and their congeniality toward one another.  It seems they have very strong family unity and deep traditions that tie generations together.

The Negro races of Africa provide another broad brush of characterization, which like with any other generality is certainly to find exceptions at every turn in the individuals who make up those nations.
To me, they seem very child-like and innocent.  Pre-Law of Moses legality as described for the previous characterization.  They are extremely loving and trusting, yet at the same time their lack of interest in things intellectual opens them to exploitation on every hand by scheming dictators, who rape the land and the people in a continual scene of discontent; while if given to benevolent leadership they would probably be among the most delightful places on earth.  Like young children, they would do great under the supervision of loving and understanding parents, but may easily fly into contention when left without that loving supervision.  As a people, they seem to excel in love of music, rhythm, dancing, and physical agility — just as a child who is so limber and who so freely sings or dances without inhibition.

In the spirit of “except ye become as a child, ye cannot enter into the kingdom of God,” these people provide us with an outstanding example to follow.
Latin America provides us with yet another opportunity to consider a broad brush description of unique characteristics of an entire people generally speaking, though again, within that culture exceptions are going to run the entire gamut.
In the chronology of a person from birth to adulthood, as I placed the African people in the early childhood stage of innocence and vital love for life, and the Mideast peoples perhaps more in a late childhood, early adolescence stage where rules and guidelines are the schoolmaster; I would place the Latinos in between these two stages, say at middle childhood.  They are not quite as innocent as the African peoples, but they are not as rigid in rules as the Mideastern peoples.  They are developing an understanding of the need for rules and discipline, but still have the innocence of childhood so as to be able to enjoy the zest of life.

In pondering who the late childhood, early teens in this analogy of the peoples of the earth in different stages of growth would be, the Asian cultures come to mind.  They are still comfortable in a rigidity of rules and structure, but there is a beginning of toying with independent thinking and a tiny dabbling in the exploration of defiance.  They are more comfortable and compatible with the tyranny that rules over them than most any other people of the earth, though they would thrive far more under the loving hand of a free government capable of exerting a firm love without stifling the free spirit.  Japan is much closer in manifesting such a climate than China, though Korea probably excels beyond them all in this ideal, which is manifest in the turbulent history they have exhibited in the last century as they have thrown off the various tyrannies that have attempted to control them, from China, then from Japan, then from Russia.

In pondering the next stage of teen years, continuing with this metaphor, I think of the Asian/Caucasian peoples of the “former” Soviet Republics, who are yet in the bondage of the law, but are more apt to exert their independence and defiance, and who thus receive a heavy hand of oppression to keep them in line.  They, more than the Asian countries, would benefit from a loving firmness more than the brutality to which they are subjected, though their defiant spirit has a love/hate collusional relationship with that brutality and thus helps to perpetuate it.

As for a late teens, young adult phase in this analogy, I think of the European peoples.  They have exerted their independence, left the protective care of dictatorial parents, and have achieved a significant degree of freedom, though they are yet in a rebellious phase to a certain extent, rivaling in their “liberties,” and thus delving into various excesses.  Their challenge is to learn the need to put off their natural man and to receive a new heart through the baptism of the Spirit, so that the body might come into subjection of the Spirit of God, rather than being the master of the passions.

The final stage of development I see, using this metaphor, is early young adulthood.   The nations or peoples I see in this phase are the Americans as well as the Canadians to a lesser extent.  They exerted their independence earlier than the Europeans, and have excelled in indulging in their liberties even more than the Europeans.  And as a corollary, they are more ripe for a baptism of fire as they are coming to their senses and realizing the need for a transformation in their life.

That then brings us to a prophetic statement as to what is in store next.
Having established this comparison between growing from childhood into young adulthood, I would now like to introduce another corollary metaphor — that of entering into marriage, at which stage one has now arrived at full adulthood and is ready to propagate their own offspring.
The husband in this case is the kingdom of heaven, and the bride is the kingdom of God which will be established on earth — which is just around the corner in becoming a reality.
We are in the stage of preparing for that wedding.  And the current suitor, even the kingdom of Babylon, who stakes its claim on the bride, will not give up without a fight.  But the mighty change that will come upon the people who come forth with a broken heart and contrite spirit, will free them from the chains of their former lover, their carnal master.
The remnant who come out of Babylon, especially of America, but also from all nations of the earth, will establish that kingdom of God on earth, creating this purified bride, with which the kingdom of heaven will then unite in marriage.
This united husband and wife will then reign with benevolence over all the earth, administering to the various peoples of the earth what is best suited to their needs, their strengths, their weaknesses.

All the peoples of the earth will become united as one body, each contributing to the whole in a marvelous symphony which will be called Zion.
I don’t get tears much anymore because I am so used to learning wonderful things, both from my personal studies as well as from what others impart, but I have tears in my eyes now, and a lump in my throat as I ponder on the beauty of this revelation.
So as we anticipate this wedding, with all the jitters and all the distractions, perhaps this analogy can help us put things in their proper perspective.
That our hearts be inclined to God and the pending wedding that awaits us is my humble prayer which I offer in the name of Jesus Christ, our Savior and Redeemer.  Amen.

I fully recognize the fact that in today’s modern ‘PC’ environment, discussion of the nations/races is a charged topic, even more so than gender discussions. However, differences DO exist and should be understood, I believe.
My kids, going now to public schools, (we couldn’t afford private anymore and my wife couldn’t keep up with home schooling again at this point in time) think that I am racist because I don’t think it’s wise to intermarry–it brings a lot of baggage IMO.  My quick reply is that I didn’t create the peoples of the earth, God did.  And so there must be some cosmic reason and purpose behind this reality.  I say to them then that God must be racist to have created them yet they/we are ALL His children.  It’s no small secret to any scripture reader that God has commanded the peoples of the earth to remain (for the most part) distinct in their identities.  Why?
If however this topic is TOO hot for the folks in this forum or its moderator, just let me know and I’ll move on to other subjects.  Perhaps there is nothing to be gained here….or is there?